​Spencer Hua, 7, is just minutes into his piano lesson when his mind begins to wander. He closes his eyes and rests his head on the keys.

It's normal for a child with autism to get distracted this way, but Spencer's teacher, Beth Bauer, knows exactly how to bring him back.

"Should we do the duet today?" she asks, taking his hand. "Do you want to count or should Beth do it?"

Bauer peppers Spencer with questions throughout his half-hour session, keeping his fingers flowing, his mind in the world of music.

Her techniques seem like quick, natural ways of taming a wandering mind, but they've taken Bauer years of practice, research and trial and error to develop.

When she started this work less than a decade ago, there were virtually no reference books on teaching piano to disabled students. She could find plenty of music therapy programs, but they focused on using music to soothe and stimulate. Bauer wanted to raise that bar: She hoped to teach her students how to play.

As it turns out, music instruction for profoundly disabled students was--and remains--a vastly unexplored area. For all the thousands of piano instructors, only a small number take on children with disabilities such as autism, Down syndrome and severe mental and developmental delays, says Brian Shepard, spokesman for the Music Teachers National Association.

Scott Price, associate professor of piano and piano pedagogy at the University of South Carolina, is among that select group and has given presentations on the topic at several key gatherings of music instructors nationally.

"This is a brand-new thing in the piano teaching field," Price said. "Piano teaching in this country has really been about playing for a hobby or preparing for the next competition. Nobody ever thought this group could play. Now we're discovering they can and that they do it really well."

Leaders of the Community School of the Arts at Wheaton College came to that realization after bringing Bauer on six months ago for a handful of private students. Since then, they've been overwhelmed with requests from parents and have added another instructor to teach a group class. They expect to expand the entire program by the fall.

Bauer came into the field somewhat by chance. Her lifelong dream was to become a professional pianist. But after finishing her master's degree in piano performance, Bauer learned a hand injury would prevent her from moving toward her goal.

As she struggled over what to do, Bauer met a neighbor who asked her to teach piano to her 6-year-old daughter with Down syndrome. Several other teachers had refused.

Bauer decided to give it a try. She drafted her own plan--consulting special education textbooks, developing a color-coded keyboard, and setting up a system that combined games, clear expectations and multiple rewards. 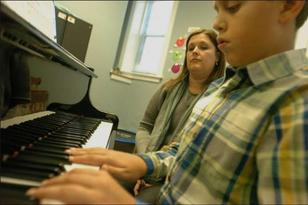 The young student responded so well that Bauer began taking others with similar disabilities. Soon, she had a new educational path: a doctorate in music education with a minor in special education, with individualized studies of piano pedagogy, at one of the nation's most respected music schools, Indiana University in Bloomington.

Bauer's dissertation for her doctorate, earned from IU in 2003, was titled, "What Should Be an Appropriate Approach to Piano Instruction for Students with Down Syndrome?" Professor of music Estelle Jorgensen oversaw the project and was impressed.

"This whole problem has been so invisible, and I think what Beth is trying to do is make it visible, make teachers aware of the fact that there are some approaches that seem to work," Jorgensen said.

Indeed, some private piano teachers working with special-needs students say they've been pleasantly surprised by their results. In many cases, hidden talents have emerged, opening up new opportunities for children in desperate need of fresh ways to express themselves.

Price took on his first special-needs student five years ago. Brittany Maier was blind, autistic and had severe developmental delays. She couldn't speak or feed herself, yet she was taking stabs at the piano keys and was fascinated with music of all kinds.

After several lessons with Price, Maier's extraordinary talent emerged. She was classified as a savant and is performing around the country.

Now 16, Maier and her mother are appearing this week at the Autism Society of Illinois' conference, and she will perform for the public at 11:30 a.m. Saturday at York Community High School, 355 W. St. Charles Rd., Elmhurst.

While none of Bauer's students has reached that level of expertise, she has uncovered some amazing talent--including Spencer's.

In a classroom of mostly autistic children in Naperville, Spencer has limited verbal skills and rarely speaks.

Yet after less than a year studying with Bauer, Spencer is pounding out flawless versions of "America the Beautiful" and "Home on the Range."

Not all students are as advanced as Spencer, but parents say the effect on their children is just as profound.

"I can honestly say this has changed my life and my son's life," says Zena Nuehring, whose autistic son, Jason, 6, started private lessons with Bauer a year ago.

In her gentle, prodding way, Bauer says she hopes to instill her own life philosophy in her students.

"When someone tells me I can't do something," she says, "I like to prove them wrong."​